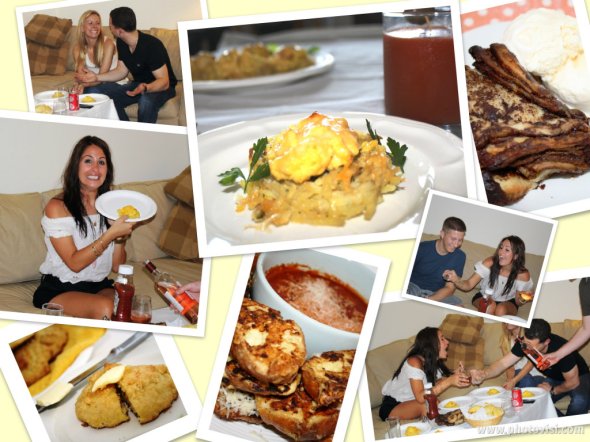 I come from a set of mixed parents.  My mom is of one ilk.  My dad another.  They have different beliefs.  Different philosophies.  Different practices.

You see, my mother is a devout rule follower.  If you tell her that she must stand on this line, with this form, and give it to this person? She’ll be there.  Completed form in hand.  Because those are the rules.

My dad?  Not so much.  He might be there.  But he would find a shorter line.  And give his form to a different person.  And have them fill it out.  And if that didn’t work?  He’d leave. Because why should he stand on a long line, just because someone says so?  He’ll figure it out on his own.

And then there’s me.  I’d like to think I fall somewhere in the middle.  For the most part, I’m totally with my dad on this one.  I mean, why should I do something a certain way just because that’s how it’s supposed to be?  Who cares?  What does that mean anyway?

But for me, (and this is where my dad and I differ) there are some exceptions.  When it comes to school or work, I follow the rules.  To a ‘t’.  Every time.  Mostly because I don’t like to get in trouble.

So when Eggland’s Best contacted me to see if I wanted to host a Brinner Party, it was an absolute no brainer.  Breakfast…. for dinner?  It’s the perfect compromise!  You’re supposed to eat breakfast for… well, breakfast… but we would be having it for dinner!  What better way to break the “rules” with no chance at all of getting in trouble, than with a delicious meal? Brilliant!

So I called a few friends, invited them over, and it was set.  Using the “Brinner in a Box” I received from Eggland’s best, I was able to create a delicious and budget friendly Brinner to remember.

Today I’m going to share two of the Brinner recipes I used for my party (other than the two I linked to above).   Stay tuned for separate posts for the remaining recipes. 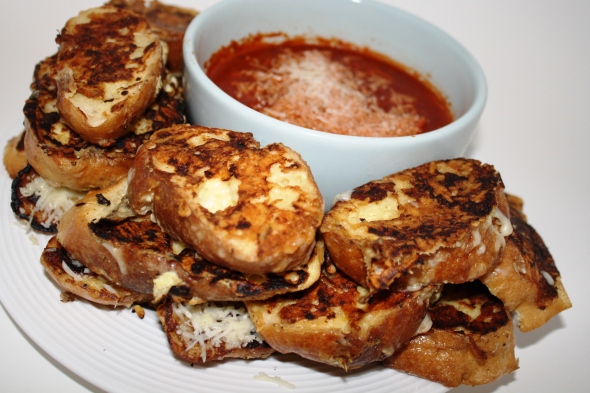 1.  In a loaf pan, whisk together milk and flour. Whisk in eggs and a pinch of salt.

2.  Soak bread slices two at a time in egg mixture for 10 seconds on each side.

3.  Spread cheese on a plate. Press soaked bread slices into cheese, pressing down slightly so that cheese sticks to both sides of bread slices.

4.  Heat a non-stick skillet to medium heat. Lightly spray with oil and then put four bread slices in pan. Cover with a lid and let cook about one minute per side, until golden brown and cooked through. Cook remaining bread slices the same way.

These savory french toasts were the perfect start to my Brinner!  In addition to being extremely easy to make (I actually had everything ready beforehand and assembled/cooked them up while everyone was already over), they were absolutely delicious!  Who doesn’t like a fun appetizer to dip? 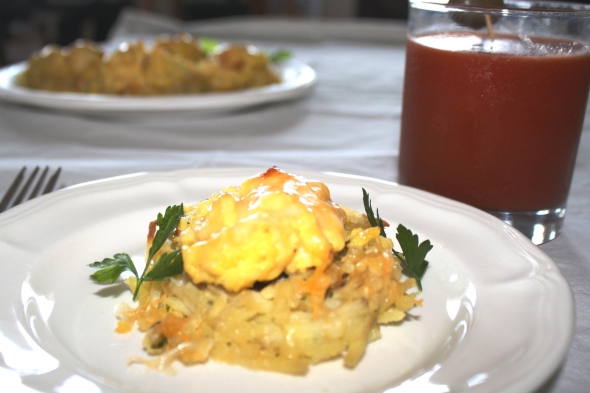 1.  Preheat oven to 375 degrees F. Grease a large baking sheet; set aside. In a large bowl, stir together potatoes, the 3 beaten eggs, parsley, and the 1/2 teaspoon salt. Shape mixture into 12 mounds (about 1/3 cup each) on prepared baking sheet. Press the back of a tablespoon into each mound, making a nest. Bake for 20 to 25 minutes or until lightly browned and set.

2.  Meanwhile, beat together the 14 eggs, milk, the 1 teaspoon salt, and pepper with a rotary beater. In a 12-inch skillet, melt butter over medium heat; pour in egg mixture. Cook over medium heat without stirring until mixture begins to set on the bottom and around edge.

3.  With a spatula, lift and fold the partially cooked egg mxiture so that the uncooked portion flows underneath. Continue cooking over medium heat for 4 to 5 minutes or until egg mixture is cooked through but is still glossy and moist. Remove from heat.

4.  Spoon about 1/3 cup of egg mixture into each potato nest. Sprinkle cheese over eggs. Return to oven; bake about 2 minutes or until cheese melts. If desired, garnish with parsley. Makes: 12 servings

I have to say, as simple as they sound, these nests were probably my favorite recipe of the night.  They were so cute, simple to prepare, and tasty!  Definitely a perfect brinner dish.

Your Turn (aka. The Giveaway)

I am so glad that Eggland’s Best asked me to host this brinner party!  The food was great, the company was amazing (as always – thanks for coming, guys!), and it was a nice deviation from the norm.  In fact, Eggland’s Best was so kind, that they’re offering to send one of my lucky readers a chance to host their very own Brinner Party by sending them a Brinner in a Box as well.  The box will include:

Optional: For those that want more chances to win, leave a separate comment for each of the following things that you do for one additional entry per comment:

You may enter any time until Wednesday, July 6 at midnight.  Winners will be announced on Thursday.  Good luck!