Growing up, I lived on Long Island.  I was your typical LI girl, hanging out at Starbucks every day after school, going on a Caribbean vacation every year, having my parents buy me whatever I needed.  In short, I was spoiled lucky.

It wasn’t until I went away to college that I realized that this was not the norm for everyone.  My first week away, I earned myself the nickname “Grey Poupon” when I mentioned that on Long Island, hamburgers from McDonalds didn’t come with mustard.

“What do they come with, grey poupon?”

And that was that.

I have to admit that I was surprised by that last one.  I had never really considered myself snobby before.  And compared to a lot of my LI cohorts, I probably wasn’t, but in the grand scheme of things, I learned that I really was.

Since then, I’ve tried to tone down a lot of my snobbiness.  I’m not saying that the occasional snooty thought doesn’t occur to me, or comment doesn’t come out of my mouth, but I do try to suppress most of it.

Unfortunately, some of it is ingrained in my DNA.  (No time for a nature vs. nurture discussion… just humor me.)

One of those insuppressible instances occurred when I first saw this recipe from Paula Dean on Let’s Dish.

Truth be told, Paula Dean alone sets off my snob-o-meter, but coupled with a recipe that contains marshmallow fluff?? Forget it.  That’s off the charts.

The pictures looked scrumptious, but I just couldn’t see myself going into the supermarket and picking up a jar of fluff.  In my mind, that would be in the same category as driving my rusty old pickup truck to a NASCAR race….

Not. In. This. Lifetime.

But I couldn’t stop thinking about those S’mores Bars.  Every time I needed to make a dessert to bring somewhere, those delicious gooey melty looking bars popped into my head.

Finally, this weekend, I caved.  I was craving the graham cracker, chocolate, and marshmallow trio all week.  My brother’s visit home from college was all the excuse I needed to whip up a batch of these bars.

I am happy to report that me buying a jar of fluff from the grocery store did not result in the end of the world.  I even tasted a spoonful of the fluff before using the remainder of the jar in the bars.  It wasn’t bad.  It’s super sweet and very sticky.  Not something that I’ll be utilizing in a sandwich anytime soon, but perfect for this recipe.

2.  In a large bowl, beat butter and sugar with an electric mixer until creamy. Add eggs and vanilla; beat until combined. 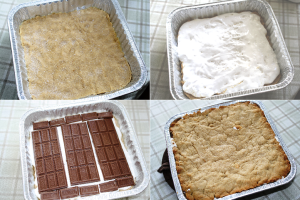 5.  Bake for 25-30 minutes. Cool completely before cutting into squares.

I’m glad I got over my aversion to marshmallow fluff, because these bars were awesome!  They are so gooey and delicious.  Everyone was raving about how good they were, and they perfectly satisfied my craving for s’mores!