When people ask me where I went to college, I answer with a mildly vague “upstate NY,” hoping that it’s enough to satisfy them.  It’s not that I’m embarrassed or anything.  I would answer more specifically, but I know it’s useless.  Of the ten million times I have answered with “Potsdam,” a total 2 people have ever heard of it.

So instead I give my vague answer, and I wish that it’s sufficient.  It never is.  It would be really great if it was one time, because it would save me from having the following conversation.  Again.

So, where did you go to college?

Never heard of it… where’s that?

It’s way upstate.  Like as far as you can go.

No, farther north than that but in the other direction.

No, 2 ½ hours north of that.  About 20 minutes from the Canadian border.

And it’s true.  The closest landmark that anyone not from upstate NY can relate to Potsdam is Canada.  In fact, we were so nearby to Canada, that we would travel over the border to take advantage of the lower drinking age there was a lot of Canadian influence around campus.

It was not uncommon to see Canadian flags being flown from dorm room windows, to hear people adding “eh?” to the end of their sentences, or to be offered Labatt Blue at a party.

It didn’t take long before I embraced it, ordering it in the dining hall whenever I got a chance.  It was by far my favorite thing to come out of Canada.

I am happy to report that I have a new favorite Canadian export: Canadian Beef.

No, it has nothing to do with the beef itself (I really don’t know anything about that), but my newfound love is for the Canadian Beef organization!

Truthfully, I’ll love anyone that gives me $100!  Uh, that didn’t come out right.

Anyway, this month’s progressive party from Kitchen Play is sponsored by Canadian Beef.  Anyone that attempts to recreate one of the menu items from the party and follows the instructions on the site is entered for a chance to win $100.

I chose to try my hand at the Thai-Inspired Beef and Vegetable Soup with Rice Noodles, originally made by It All Starts with Butter. This tasty veggie version is what I came up with:

I changed the game from beef to tofu.  You could easily substitute chicken, seafood, or any other protein your heart desires.

2.  Add peppers, carrots and mushrooms to broth, and simmer until softened, about 7 minutes. 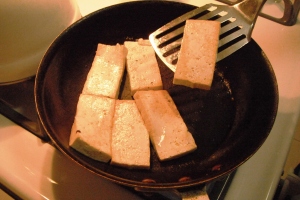 3.  While vegetables are simmering, slice each package of tofu into 8 slices, for a total of 16 slices. Heat a large skillet to medium high. Add half teaspoon of the olive oil and sear 8 slices of tofu (about 2 minutes on each side). Remove seared tofu slices and repeat with remaining oil and tofu. Portion 4 slices of tofu into each of 4 bowls.

4.  When the vegetables are finished simmering, carefully remove them from the broth with a slotted spoon. Divide the vegetables evenly among the bowls.

5.  Add the rice noodles to the broth. Cook the noodles in broth according to the directions on the package.

6.  When noodles are done cooking, portion into the bowls, and cover with stock. Serve and enjoy.

This soup is good.  Between the garlic, ginger, lime juice, soy sauce, and veggies, there is a lot of flavor going on here.  The only thing that I might change is to add a little more broth before serving, as a lot of it does cook off when boiling the veggies and noodles.  The portions aren’t huge, but it made a very tasty light lunch.  You could easily make it only 3 servings to produce more generous dinner sized portions.