After the very first bite of this soup, I knew I had to share it with you.  Not doing so would have been doing a disservice to you, to this blog, and to the very spirit of food blogging.  If you are a food blogger, and you make something SO easy and delicious, you must share.

Just know, that this was not an easy process.  I mean, the soup itself? Easy as pie.  Seriously, it’s like the easiest soup ever.  Just cut up a few things throw them in the pot, sauté and boil.  No pureeing.  No extra pots to clean.  No problem.

But the process?  It was…. a process.

You see, I made this soup on a Wednesday night.  And night time is just not a good time for pictures.  So I figured I would take pictures of the leftovers the next day.  But I work during the day.  And by the time I got home on Thursday, it was dark again.  And I was hungry.  So I ate the rest.

Luckily, Jake said this soup was so good that he could eat it every day.  Figure of speech?  Maybe.  But I took him literally.  And made another a double batch on Sunday.

I stopped at the grocery store to pick up ingredients around 3:00.  I knew that this soup was so quick that I would have plenty of time to make it with time to spare to get a good picture before it got dark.

…which would have been true, had I not left one of my grocery bags at the store.  The bag contained a number of groceries… including the tomato puree for this soup.

So back to the store I went.  I ran straight to the information desk asked explained the situation to the woman behind the counter.   I wasn’t sure if she heard me.  But then, after an uncomfortably long period of time of her staring at me as if I just told her I hadn’t showered in a month, she muttered one word.

Right.  The receipt.  That would have been helpful.  If I had remembered to take it.

Thankfully, the kid that rang me up remembered me and came to my rescue.  The woman behind the counter begrudgingly said I could take my groceries home.  Except they had already put everything away, so I had to go back through the store and pick everything up again.

Let me tell you, they don’t call it Super Stop and Shop for nothing.  The store is huge.  And I was running out of daylight.  So I did what any responsible person would do.  I ran.  (Consequentially, I also learned that I never want to be on Supermarket Sweep.)

I got home just in time to see the sun set.

After the panic of having to actually function before 8:00am subsided, I set my alarm.  For 6:30.

You are all lucky I take my job hobby seriously.

The original recipe, from Food & Wine, called for chicken thighs.  I prefer breasts, so that’s what I used.  It also said to cut the chicken into 1 ½ by ¼ inch strips.  I misread it (both times) and cut mine into ½ by ¼ inch strips (which were basically just the smallest little pieces I could cut the chicken into).  It would probably be good either way, but I did like the tiny little pieces of chicken that almost melted into the broth they were so small.  It’s up to you.

1. In a large pot, heat the oil over moderate heat. Add the onion and cook, stirring occasionally, until translucent, about 5 minutes. 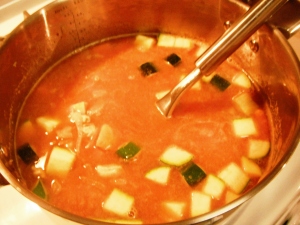 2. Increase the heat to moderately high. Add the chicken, cayenne, cumin, salt, and pepper to the pot. Cook, stirring occasionally, for 2 minutes.

3. Stir in the sweet potato, zucchini, tomato puree, water, and broth. Bring to a boil. Reduce the heat and simmer, stirring occasionally, until the vegetables are tender, about 10 minutes.

4. Add the couscous to the soup. Simmer for 5 minutes, stirring occasionally. Remove the pot from the heat. Let the soup stand, covered, for 2 minutes; add the parsley and serve.

This soup was so good that I didn’t mind eating it for 6 of the past 8 weeknights.  Or going to the store multiple times to get the ingredients.  Or waking up at 6:30am to photograph it.  Now that’s saying something.

P.S.  This is my submission to this week’s Couscous BSI.  I am hosting this week, so you should check it out!